This sequence was part of Karen Caiazzo's class at O2 Yoga yesterday and I really dug it.

Students started in Samsasthiti (equal standing) at the back of the mat.  With hands spread out from the shoulders in a T-position, right toes pointed off the side of the mat before flexing into the foot and teeter-tottering into a Full Moon balance (couldn't find an image of this one).  Then she cued us back through center without lowering the right foot to the mat and instead had us swing our right legs back into Virabhadrasana Three (Warrior Three): 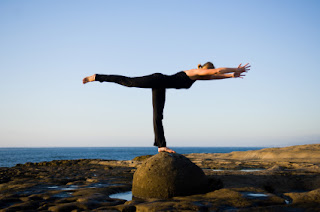 Then she had us return our hands to the mat and walk out to Downward Dog.

As always, we did the same sequence on the left side to balance things out.  I really enjoyed this and will definitely infuse it in a future class!

Sarah W.
Posted by Unknown at 8:18 AM No comments:

A mandala translates as "circle" and are meant to create a visual sense of balance.  These are often found in pictorial forms such as these: 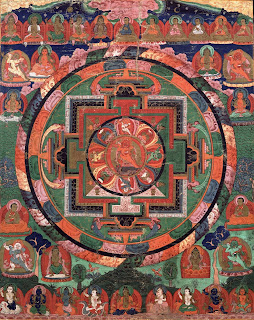 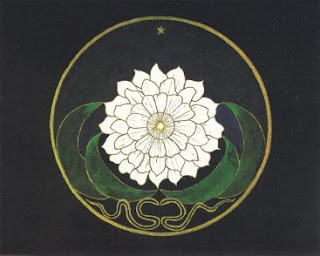 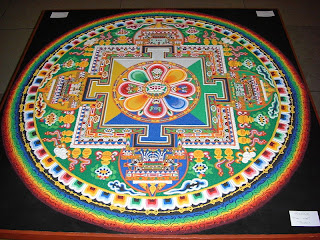 They are used in many different religious or spiritual practices to aid meditation and find a centralizing focus.

Recently, I took a yoga class where we created a physical mandala by stringing together a sequence of postures, similar to a Sun Salutation.  We started by breaking down several basic postures -- Utkatasana (chair pose), Virabhadrasana One (Warrior one), and  Virabhadrasana Two and incorporating each of these postures with variations, such as twists and lateral stretches before stringing the basic postures together in a real-time continuous vinyasa movement that starts you facing forward, spins you around, and then returns you where you started.  It was too cool, so I taught it on Sunday.

Variation options are, of course, limitless.  But what I did was start with Utkatasana: 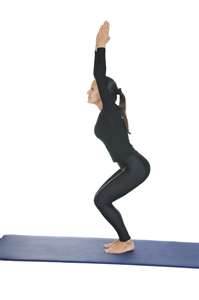 Then took a vinyasa and then came up through Warrior One: 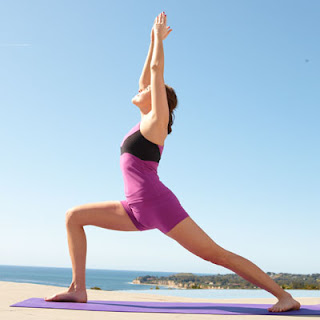 Before opening out to Warrior Two: 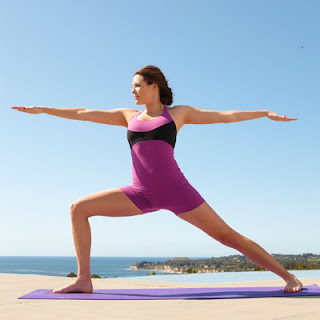 From here, students straighten into the front leg, square off, and then bend into the back knee as they take Warrior Two, now facing towards the back of the mat.  And then it's all repeated again until the students end in Utkatasana (and then Samasthiti or equal standing) facing the front once more.

It's so fun to do -- and builds an insane amount of heat.  Thank you to Kim Freeman from O2 Yoga for introducing me to this challenging sequence!

Sarah W.
Posted by Unknown at 8:05 AM No comments:

My intention is just,
well, what is yours?
Lifting from the dark
shadows of this walled
creation I've constructed
to preserve a sense
of chaos in this arena,
the internal voice of reason --
what is the reason
for all of this -- saying
I love the wrong way.  I don't
know why or how but
I do, consistently, end up
this way (crushed) -- decayed
from the inside out:
so shiny and brilliantly flawless
until the surface splits
wide and that gangrenous
spirit is revealed
as the hero within.

There's a circle to this
strategy, a before-and-after-
and-in-between.  I fall
in step in the sideshow
of it all, not up or down
but neutrally eye-level.
Hi.  I see you
clearly.  Do you see me
in this silent cacophony
of sight and sound, a disorder
of order so vibrant I want to call it
by a formal name, like Arnie
or Clementine, both real and bogus
enough to get your attention.
I want you to see the method
to this madness -- how richly preserved
I am in this place.  There is no need
for blessings anymore --
there is only a result.
This is that.  Unheard.

Yoga Makes the Sun Come Out

One of my favorite life moments happened in January 2010 on a St. John beach where I was vacationing with a dozen or so dear friends.  We were giddy to be splashing around in the crystal clear water when our native Boston was buried under another ice storm -- this was the life.  The only thing that would have made it perfect was if the clouds would part, the drizzle would stop, and the sun would shine.  But even with the light rain, we were still having the time of our lives.

Then something happened -- spontaneous yoga on the beach.

I'm not entirely sure how it got started.  All I know is it my friend Kathryn and I stood side-by-side on the beach doing a Sun A and we were quickly joined by half a dozen more of our friends until we were a line of yogis moving through a combination of warrior postures and Sun A's for ten or fifteen solid minutes -- only stopping when we suddenly realized that a new friend had finally joined us on this unreal beach -- THE SUN!  One of us pointed at the sky and said, "LOOK WHAT WE DID!"

Everyone on the beach, we realized at that moment, had stopped what they were doing to watch us salute our warming star and they were all part of the experience as we broke our formation and celebrated in a group hug.

That was before I was an RYT and was likely my first concrete experience with the true magic of yoga.  Since that January day on Cinnamon Bay, I've encountered this magic again and again.  I am a believer.

Fast forward to yesterday -- a Sunday in August in Somerville, Massachusetts on a hill overlooking the city of Boston.  This is the site of Dedication Yoga and the only thing keeping the day from perfection was the 60% threat of storms hidden in the clouds above our heads.  But we gathered for class, anyway -- a slightly smaller group than normal, but a wonderful group, nonetheless.  The focus for class was setting your intention -- what brought you to the mat today -- what did you hope to achieve either on the mat or off -- and after a few moments meditating on this, class was underway.  And by the time we came to the final vinyasa -- wouldn't you know it?  The sun came out.  I'm not sure I could contort my face into a bigger grin.

And after twenty minutes or so of writing and reflecting on our intention for the day's practice, we went our separate ways with the knowledge that no goal is impossible to achieve -- even a threat of probable rain can be overcome.

Posted by Unknown at 7:25 AM No comments: