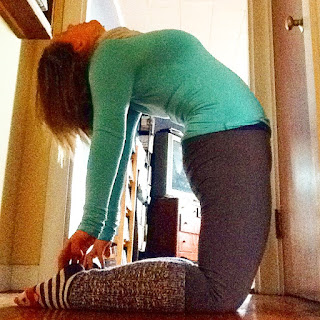 Camel Pose.  Or, casually hanging out at home.


The first time I ever did the Astanga Second Series (or Intermediate Series) was back in March 2012.   I was in my second week of teacher training at O2 Yoga, a time that is loving referred to as "Astangaland" and after slugging through Primary Series the weekend before, I was intrigued to try the next phase.  How different could it be??   At first, it was pretty comfortable, familiar territory -- those five Sun A's and five Sun B's were becoming old hat.  Then the next set of opening postures -- Warriors and Angles and Standing Forward Folds and, of course, a couple of standing balances.  Yeah, I got this.

And then the wheels came off the wagon.

Once we'd completed the "warm up" and moved into the actual Second Series postures, I was like a fish out of water, floppin' around and gasping for air.  There was twisting and back bending and feet being jammed behind the head.  There were exotic animals that told a story -- a peacock that is startled by a crocodile that chases a horse that jumps over a fence and lands on a cowface...  Something something something.  There's rolling and jumping and utter chaos around every corner.  And then -- seven headstands?  Good lord.  By the time we made our way into the familiar closing sequence, I was beyond rattled.  I thought to myself, "I suck at yoga.  What the hell am I doing in teacher training??"

Luckily, I wasn't alone in this overwhelming feeling and, after talking with my TT group, we all hashed out our Second Series demons and kept the momentum forward-moving.  I wondered if I'd ever do the sequence again in my yoga-lifetime, fairly certain that answer was no.  And maybe that answer would have remained a no except that when it became a yes, it truly changed my life.

A couple of months ago, I wrote a post -- "The Accidental Astangi" -- that chronicles what happened to get me to roll out my mat in Primary Series, let alone Second.  The short version of the story is my friends started teaching it and so I came to be supportive -- but what I learned was trying this practice was valuable to my growth as a yogi and, quite frankly, as a person.  Doing Second Series again after taking a three year break from it was incredibly rewarding.  While it was still hard and totally insane, I also could see how far my practice had come in the years between attempts and it was seeing this progress that allowed me to decide quite effortlessly to give this Astanga-business the ol' college try.  I set -- and have achieved -- a goal to attend a minimum of two Astanga classes a month -- one Primary and one Second.  It's a manageable and reasonable goal.  And what I'm pleasantly surprised to report is that I am being outed as a fan of Astanga.  ME!  Liking Astanga.  Those are just not words I thought I'd ever say and my friends at the studio just shake their head and chuckle at me as I nerd out about the "correct" order of the final three lotus postures in the series or options for modifying horse pose or how I challenge myself to do just a "tap down" during the three wheels at the end of class.  "I've been working on my nakrasana," is a phrase I've said as recently as last week.  A year and one month ago, I would have just given up if the teacher suggested a single hopping crocodile -- now I'm going for it with all I gots.

Who is this yogi??  Is this me now??  Man, it's just so great to report that it is!!  Having new challenges and goals and fine tuning what I have already learned or achieved means a lot to me and the concreteness of Astanga gives me such an easy yard stick to measure the distance from here to there.  It gives me a way to discuss it and a vernacular that can be easily understood.  Doing Astanga has pulled me out of my comfort zone and kicked my ass and humbled me and made me feel more proud than maybe is reasonable.  I honestly love it.  Second Series, especially, feels like an Everest to climb and the fact that I have done it twelve months in succession is a serious point of pride for me.  I'm 12 for 12, baby!!  That doesn't mean that I have nailed every pose and can do it all flawlessly -- there are quite a few flaws, actually -- but I am learning how to modify.  I am figuring out what I can reasonably approach and learn and improve upon and what I may have to modify for the rest of this lifetime.  That's what's so awesome about yoga (well, one of the million awesome things about yoga) -- there is always more to learn, to examine, to think about.  My Astanga Goal has been so easy to keep and achieve because it's such an instantaneous teachable moment.  Always.  Recently, one of the teachers at O2 joked about having a "how to do a vinyasa" workshop and my honest response was, "OK, great idea.  I'd love that."  In fact, the more "routine" a posture is, the more questions I have about it.  Astanga gives you five breaths in a lot of postures that serve as the foundation for O2 Yoga and thus gives me exactly the right amount of time to think about them before moving on to the next pose.  How cool is that??  So cool, so cool.  My yoga nerd brain just lights right up even thinking about it.

It's good to invest your time in learning experiences.  It's good to learn, period.  Yoga is something that teaches me a lot and doing it someplace like O2, where the motto is "Up Dogs, Down Dogs, No Dogma," gives me the space and the opportunity to learn what I am ready to learn as I'm ready to learn it.  No one is telling me the moral of the story -- I am left to figure that out on my own.  And what I've learned this last year during my Astanga Quest is I am just beginning to understand anything at all.  How exciting!  How rewarding!  How can it be that Astanga is part of this process at all?  Some day, my bafflement over this will dissipate and I will be better able to see how clear the path was from one point to the other.  Of course it makes sense -- five Sun A's, five Sun B's, let's go...  No reason to quit if it doesn't go well the first time -- keep putting in the work and when the time is right, you'll get the chance to try again.

What I learned is that doing Second Series the first time was hard because I didn't know what I needed to know to battle my way through it.  It wasn't that I "sucked at yoga" -- Second Series is just really hard!  In order to learn how to do it, you really have to put in the work.  The harder you have to work at something, the better it feels when you can see evidence of progress.

I still have miles to go on this journey, but there's a little spring in my step as I make my way through the wild and wacky world of Astangaland.  I'm having fun, people. Come visit me here sometime -- you'll see how pretty the sunrise and sunsets truly are.