A couple of weeks ago I went to a class at Samara Yoga that focused on upper body strengthening and reconceptualizing the "vinyasa" with that goal in mind. Pretty interesting, not to mention tough, stuff. Lately my own practice and my thoughts about teaching have wandered away from the traditional way of doing things. I have been, you might say, testing my "yoga wings" by learning from new teachers and trying to push myself to think outside the box.

I brought this sense of experimentation to Dedication Yoga on Sunday, where I taught something I'll call the Dolphin Vinyasa.

A full vinyasa from standing is pretty much the same as a Sun A:

*Some teachers will add another inhale to ardha uttanasana (emphasizing the flat back), followed by an exhale back to uttanasana.

Often we cue a "half" vinyasa between in between doing a sequence on the right and left sides. This starts with a shift forward to plank from down dog and then moves through the chaturanga pushup and up dog before returning to down dog.

The Dolphin Vinyasa starts from down dog.

1. First, internally rotate your arms, scooping your elbows in and spinning the creases up to the sky (ideally this action is also at work in down dog; get a feel for it by bringing your elbows wider than your shoulders and noticing what it feels like when you hug them in close to your body in proper alignment) while gently lowering to your forearms to the ground (it takes a lot of strength and control to get the left and right forearm to land at the same time!). Hips stay high.

2. Now you should be in dolphin pose. 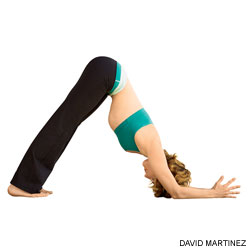 3. Unlike when you kick up to a forearm stand, you'll want your Dolphin to be long, like a down dog. If you want to get a feel for the right "length," start in a forearm plank and just shift your hips straight up and back (instead of coming into the pose from down dog).

4. On your inhale, come up onto the balls of your feet (think forward motion).

5. On the exhale, shift forward to chaturanga. This sounds, and initially feels, like an impossible transition! But it's just a matter of keeping your elbows bend and closely hugging your ribcage and then shifting the weight forward and moving it from your forearms to your hands. Elbows begin bent and remain bent as you transition from dolphin to chaturanga.

6. Inhale through up dog.

We had an interesting time playing with this Sunday. Both the chaturanga pushup and dolphin are great preparation for other challenging poses, like headstand. Plus, it's always nice to switch things up a bit, if only to remind ourselves why we like our routines.